Defilement issue on thumb due to fecal contact while changing toddler.

On Monday, April 13, the right side of the nail bed on my left thumb was inflamed (red, hot, swollen, painful). Touching the area was very painful (see figure 1).

Beginning on Wednesday hairlines of pus were visible, which by Thursday had combined into a nearly 1x1cm large pus area. On Friday, I punctured the skin at several places to let the pus out and reduce the painful pressure. On the weekend only a red and inflamed nailbed remained. The inflammation then got better and was completely gone by Wednesday. The skin was wrinkled and dead over the area of the pus. On Thursday evening I was able to remove the dead skin completely and it took another week until the skin completely regenerated.

The symptom initially was unspecific: Due to the redness, I could not make a definite determination of which tissue was affected. To my knowledge it could have been both the connective tissue and the dermis. I ruled out the epidermis, as it does not swell much.

When the pus became visible, it was clear that it was an brainstem- or cerebellum-controlled SBS in PCL phase. So at this point of the body it must be the old-mesodermal dermis (corium) and it was certainly the SBS of an “attack/defilement conflict”, either associated locally or laterally (mother/child-side), as it was on the left side of the body and I am right-handed.

The associated conflict was clear now, as there had been only one recent perceived defilement situation:

We have an 8-month-old son, who has signaled his need to eliminate his waste since birth. So from the beginning he goes to the potty (see keywords “Diaper Free” or “Elimination Communication”). Mishaps sometimes happen while he is discovering the world, so that he poops on the ground or in his pants.

On Friday, four days before the onset of my symptoms, he was naked again crawling around, when I noticed that he suddenly dropped a present. I quickly ran to him so that he wouldn’t step in it, but that had already happened, which covered his foot. I tried to lift him up without coming into contact with the excrement, but my left thumb was not so lucky, in the exact area of the later pus (DHS).

Since I stepped barefoot into a pile of dog poop as a child, turds disgust me more than other people, so this was a defilement to me, although I said to myself intellectually: “No problem, I’ll wash it off”. When diapering my son I often have a slight grimace on my face, if I do not actively prevent it – as my wife has pointed out several times (in this context she is completely relaxed and amused by my sensitivity). It seems to be a sensitive point for me.

In the subsequent CA phase, the tissue of the dermis is strengthened, as protection against the perceived defilement. The SBS was active for 4 days, and then resolved on Monday (CL). The reason was either that our son made good on the potty again or that I felt no more defilement as by then, I had washed my hands several times.

In the PCL phase, the tissue is degraded by tuberculosis, resulting in pus. The epidermis had no more connection to the dermis at this point, which is why it died.

Addition 2018: Since then, I have become increasingly relaxed with this topic and have had, especially with our second child, no problems or defilements in such situations. 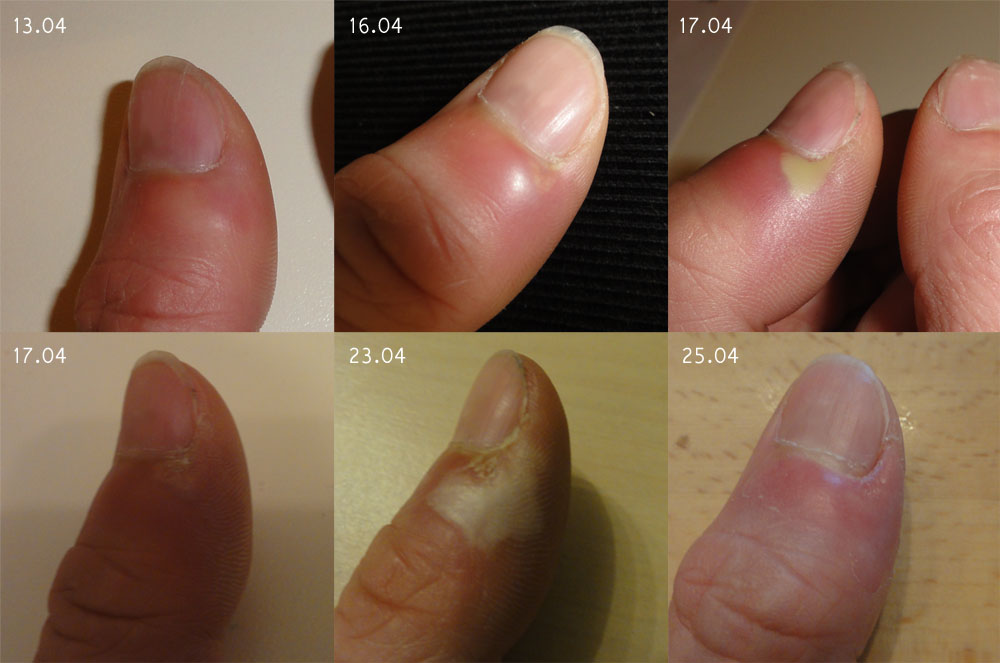 On this page you will find an introductory video series on the New Medicine’s 5 Natural Laws of Biology (5BN), which are also known as German New Medicine (GNM).
The biological laws were discovered by Dr. med. Ryke Geerd Hamer.